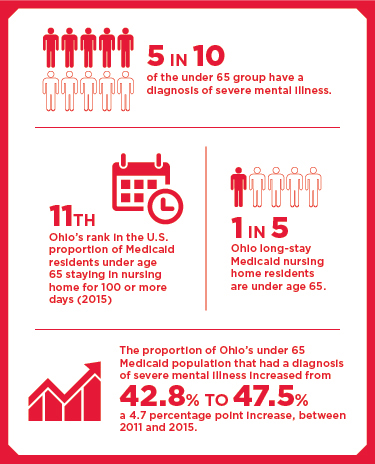 “Medicaid is the primary payer for long-term services, and demand for these services continues to grow,” (Ian) Matt Nelson, Scripps research scholar, said. “A better understanding of who these younger nursing home residents are – and what their care needs may be – is important to help inform discussion around Medicaid eligibility, coverage design, quality and costs.”

The report also found that in Ohio and nationally, Medicaid residents under age 65 with a severe mental illness are much more likely than older residents to have low-care needs. To serve adults under age 65 with severe mental illness effectively requires extending the capacity of the current mental health system and coordinating with the existing long-term services and supports delivery system.

“While Ohio has taken steps to move individuals of all ages with lower care needs out of nursing homes and into the community over the last decade, this study demonstrates the unique circumstances of the younger nursing home population and highlights the need for programs that are tailored to this group,” John Bowblis, associate professor of economics, said. “The findings provide insights on what level and types of community resources are needed to provide safe, appropriate, and cost-effective services to this high-risk population.”

This site uses Akismet to reduce spam. Learn how your comment data is processed.